Sunday 9th October  sees CCR’s ‘Belles of Centrinnians’ head up the M1 for their first visit to the Sheffield Steel Roller Girls. This is the second time the teams have met, with the first bout in Birmingham back in September 2010, saw CCR run out winners by 161 – 40.

While SSRG have been in action already this season, racking up a 148 – 96 victory against Newcastle back in early September, this is the Centrinnians’ first bout of the new season, following an extended Summer break, so its sure to be an interesting match up.

This is also the start of an exciting period of 3 bouts in 5 weeks for the Centrinnians with the trip to South Yorkshire being followed by an International double with the girls heading to Germany to take on Stuttgart at the end of October, then taking on the USA’s Sioux Falls back in Birmingham in mid November.

First up though, its those Sheffield Steelers! For tickets details, times and venue address click on the link below 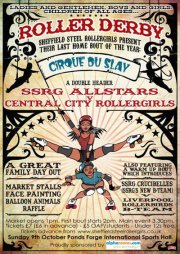