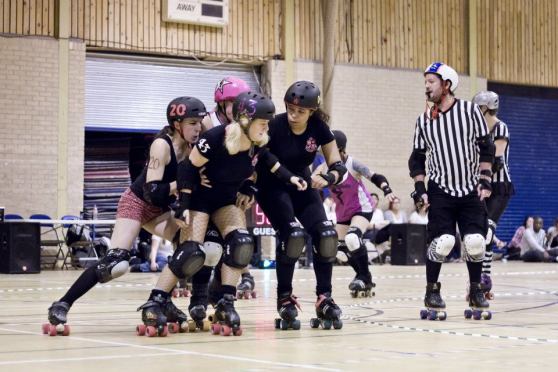 Sioux Falls rounded off their UK tour with a second victory in three days at CCR’s first international home bout.

On Sunday November 14th Sioux Falls Roller Dollz (SFRD) arrived at Cocks Moors Leisure Centre ready to face Central City Rollergirls (CCR) following a loss to London Roller Girls on Saturday 13th and a victory against Lincolnshire Bombers the night before. SFRD were looking to return to South Dakota with another win to celebrate on the long flight back home.

CCR entered the bout ready to bounce back from their defeat in Stuttgart, and looking forward to their first WFTDA-sanctioned bout since becoming a member of the WFTDA Apprentice Scheme.

In the first few jams of the game both teams played defensively – with 3-strong walls and the scores relatively low – but SFRD’s jammers managed to break through some CCR walls and gain the lead from the start. An SFRD power jam 10 minutes into the game  increased this lead to 37-6.

Sioux Falls held their lead for the rest of the game, and kept tight walls holding back the CCR jammers,  while SFRD jammers were managed to bustle their way through CCR walls. Often both jammers exited the pack on each other’s tails, and after a bit of ‘Jammer on Jammer’ action the jam was called early.  CCR’s jammers then managed to skip round SFRD walls and gain lead jammer status,  which caused the home crowd to erupt.

The strong US team meant business, and CCR’s resilience saw them keep their head throughout the game-staying focused on calm, tactical plays, but Sioux proved too strong to beat and continued to a 193 – 65 victory.

CCR are celebrating their 4th birthday on the 26th November and the  ‘Belles of Centrinnians’ are competing at the first UKRDA Expo Tournament at Tattoo Freeze in January 2012.