CCR play hosts to London Rockin Rollers for the first time at Cocks Moors Woods Sports Centre on Saturday 19th May will see – and although it’s the first time LRR will enjoy the warm Brummie welcome from CCR, this is certainly not the first time the two leagues have met on track.

CCR and LRR have met 3 other times on track competitively (and some derby oldies may even remember some mixed scrimmages held in Milton Keynes back in 2008!  Sigh… beautiful derby memories.. but back to the report!) The first time CCR’s A team, the Centrinnians, met LRR’s All-Stars was at the second Tattoo Freeze tournament in Telford, January 2011.  It was the final bout in a derby-filled weekend, and LRR emerged triumphant, with a scoreline of 116 to CCR’s 55.

Well, any fan of CCR knows that the league motto is ‘Harder, Better, Faster, Stronger’ and it is something that we take very seriously.  The next few months were spent working on our fitness, tactics and teamwork.  By the time we boarded the party bus to London, the Centrinnians were ready to bring everything they had and leave it all on the track.  And that it exactly what we did.

The bout started off the way it meant to go on- tight and fast!  Scores went back and forth until two powerjams against LRR sent the score rocketing into CCR’s favour.  In the second half,  both teams came out fighting, with LRR making a good effort at closing the points gap, but as time ran out, CCR was victorious at 123 to LRR’s 101.

CCR had a much needed rest over the summer and came back fighting fit for the 2011/2012 season.  The Centrinnians opened their season with an away win in Sheffield at the incredibly festive Circus themed ‘Cirque de Slay’.  Then they ventured to Stuttgart for an away loss to the German hostesses with the mostests (sparkling wine in the changing rooms! And never forget the surprise engagement of our very own Incredible Hulse!)

Finally, it was time for the Centrinnians to play one at home and hosted our very first WFTDA sanctioned bout against the Sioux Falls Roller Dolls.  It was a loss, but we made CCR history by taking the first major steps in becoming a full-fledged member of WFTDA. 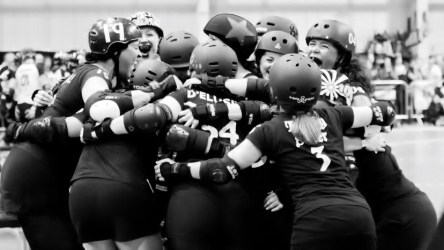 After a bit of mince pie fun, it was time for the first UKRDA tourney at Tattoo Freeze 2012.

CCR played admirably, posting up wins against long-time local rivals Birmingham Blitz Dames and old friends, the Glasgow Rollergirls.  Then it was time to play LRR, who we had not seen since May. LRR took an early lead, and they held onto it for the rest of the bout, finishing with a decisive win.

February saw the Centrinnians travel to Rainy City and their new warehouse, the Thunderdome (more like Snowdome- BRRRR!!!) where CCR left with another away win.  The Centrinnians came back home to take on ARRG’s Twisted Thistles and finally, finally emerged with a victory against our long-time Edinburgh friends.

Since then, our ladies in black have been training hard for our season finale against LRR.  Both teams have won and lost to the other in the past, but what will happen this time?

Will history repeat itself in the form of a CCR loss at Tattoo Freeze and a CCR win in interleague play?  Or will LRR repay the favour of a home loss to CCR?  Either way, it’s going to a hard fought bout between two experienced leagues with an uncertain outcome right to the very last jam!

You can find more information about the bout including directions to the venue on the facebook event here or buy tickets at a discounted price for Saturdays bout here.