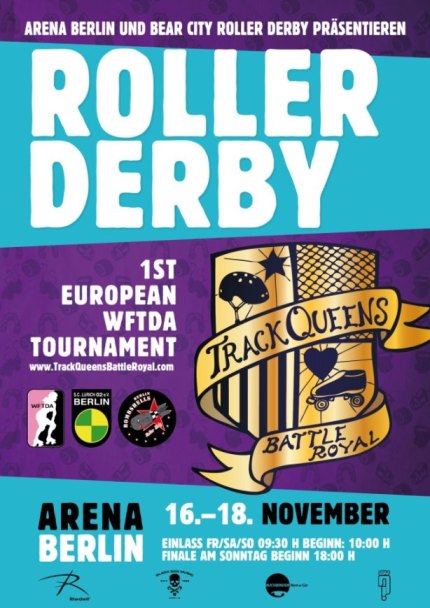 Central City Rollergirls Cents are headed to Berlin to take on the crème de la crème of European teams, for the title of ‘Track Queens’.

Skaters, refs and non-skating officials from CCR are taking part in the event, alongside leagues from London, Edinburgh, Helsinki and Berlin, which comes as the team has risen to number 3 in the European rankings.

Team Captain Carly ‘Hustle Her’ Nichols says making the final 10 is a big deal for the league, “CCR are really honoured to be invited to the first WFTDA tournament, and we’re looking forward to travelling to Berlin to see and play teams that we normally wouldn’t.”

CCR and other competing teams are member leagues of the Women’s Flat Track Derby Association (WFTDA), and Vice Captain of the travel team Gemma ‘Agent Dana Scurry’ Harvey says it’s an exciting time for European roller derby, “With London Roller Girls finishing yet another successful stint at the East Regional tournament in the US, and following Berlin’s US Tour, European teams are realising the full benefits of WFTDA membership. CCR have continued to work hard and we’re looking forward to again proving ourselves as a competitive team.”