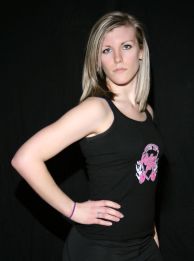 I was at Cocks Moors gym whilst a bout was going on and saw loads of people on skates and wanted to know more. I went in the sports hall and spoke to Enzo who briefly explained the rules and gave me contact details.   A week later I was at my first noob session being taught how to stay upright on skates by Twisted Mister!

Is there a story behind your name and number?

I do research using vaccinations and spent the first year of my skating career finishing my PhD, and in many ways skating helped me with that so thought it was apt!

At the time I chose it, I reeeeeally wanted to be <.05 (being the number which represents significance in statistical tests) but the number 5 was taken and was deemed too similar.  434 is the number of people I vaccinated during my PhD, which isn’t quite as geeky but I’m very used to hearing the refs call it now!

What’s your favourite skate set up?

What piece of kit has made a difference to your skating the most?

Although its not really a piece of kit, I think off skates fitness helped me early on in my derby career. Whilst my skating skills didn’t improve in tandem with my fitness, I definitely appreciate it now. Plus it made me feel like I was really improving at something at the time!

To be honest I’m still experimenting with bout day nutrition to try and get it right – I’m still working on the balance between feeling not too full and having enough energy! At the last bout, I had a big salad and that seemed to work quite well!

And finally, what is your ultimate Derby goal?

Once we’ve scored ALL the points and taken over the world? I’d love to do scientific research involving roller derby and vaccinations somehow…