CCR’s Slay Belles close this year’s derby fixtures for CCR when they take on Wiltshire Roller Derby this Saturday, 14th December. We look back on a busy November for CCR and look forward to Saturday’s game below…

Double Rainbow!!! On Sunday 17th November, CCR played host to Paris Rollergirls in an A vs A and B vs B team double header. CCR managed to do what had evaded them for over three years, and bought home the double win! A quick summary of the games follows. 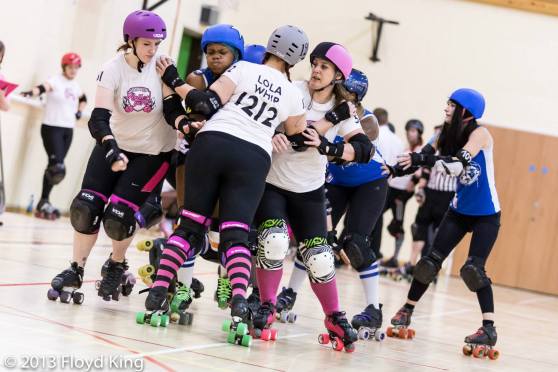 Central City Rollergirls B 188 vs Paris Roller Girls B 152

The first half of the game saw a dominating CCR side at the start. Smart recycling from CCR blockers forced track cuts which saw them on the receiving end of several power plays. Paris blockers soon tightened up their walls in normal game play however meaning that CCR had to deploy offense blockers to release their jammer. CCR managed to retain their lead to make the scores CCR 122 – 59 PRG at the half.

The second half saw a revitalised Paris squad take to the floor. Receipt of a few power plays to aid their own scoreline and strong blocking to keep CCR’s points at bay saw them take a big chunk out of the score deficit. Although often down on pack numbers CCR fought all the way to the end and kept their lead until the final whistle. The game closed at CCR 188 – 152 PRG.

Central City Rollergirls A 226 vs Paris Roller Girls A 202

Much like the B team had before them, CCR A got off to a strong start. The first few jams were neck and neck, but it wasn’t long before CCR walls stood strong and allowed their jammer to rack up some natural grand slams to make the score 50-16 after around 8 minutes of play. CCR retained this lead for the rest of the first half making the scores 119 – 81 at the half.

The second game seemed to echo the first and the Parisians came back fighting in the second half ande a power play with about 20 mins left in the game enabled PRG to close CCR’s lead to just one point (146-145).  CCR managed to exploit a power jam shortly after this however, to pull their lead back out to 171 – 145. Despite the packs seemingly getting faster and faster in desperation for scoring, CCR kept their lead to close the game at 226 – 202.

Brighton Rocks CCR A team. Oh we do like to be beside the seasiiiddeeee… ahem… and so on Saturday 23rd November, riding high from their Paris win, CCR travelled south to visit Brighton Rockers, a team they had been looking forward to facing since they almost met earlier in the year at UKRDA Southern Tournament in May. The bout proved to be another close nail biter, with fans from both teams on their feet by the end of the game.

Despite formidable walls from the home team (following an epic dinosaur chase skate out), CCR got off to a great start. Brighton gifted them some power plays in the first half which meant that when CCR deployed some effective offense (the solid defence and strong blocking form Brighton made this a necessity) they were able to pull out a commanding lead. At the end of the first half the scores stood at BRRD 65 – 106 CCR.

Brighton upped their defence and reigned in their jammer penalties for the second half of the game, meaning they were able to gradually claw back the deficit in the score line. With 15 minutes remaining in the game the scores stood at BRRD 111 – 134 CCR. A subsequent power jam in Brighton’s favour, then a series of jams where they gained lead jammer status meant they were able to take the lead at BRRD140-134 CCR. The game stayed almost neck and neck for the remainder of the bout, several lead changes kept the audience on the edge of their seats and shouting for their respective teams and with 1.20 to go the score stood 160 – 156 in Brighton’s favour. A power jam finish for Brighton saw them bring home the win with the game closing at BRRD 175 – 156 CCR

CCR A bring home a big win from Sheffield. Rounding off their ‘3 bouts in as many weekends’ schedule, CCR A travelled north to take on Sheffield Steel Rollergirls on November 30th. CCR and Sheffield have met on track a few times previously being two of the UK’s veteran leagues with the last time they met CCR taking home the victory 151 – 119 (Sept, 2011).

CCR started this game as they meant to go on, with strong walls holding the Sheffield jammer while co-ordinated offense released their own – after about ten minutes of play scores stood at SSRG 6 – 75 CCR. Sheffield fought back though, delivering some massive hits to cause disruption in the CCR packs to get themselves some more points before half time; SSRG 31 – 119 CCR.

Both teams enjoyed their fair share of power plays and Sheffield blockers managed to reign in their penalties in the second half which often gave them pack advantage and Sheffield managed further their score in the second half through tenacious jamming. However the lead amassed by CCR in the first half was too much for them to conquer and the visitors left as victors. The game finished at SSRG 81 – 241 CCR.

Slays take on Wiltshire THIS WEEKEND. So that’s what been happening at CCR HQ until now. This Saturday the Slays will be looking to repeat their win against Paris when they take on Wiltshire Roller Derby. Although the two have never met on track before, both teams are looking forward to the game and the return of a familiar face…

Slays Captain Lola Whips tells us that the Slays are “really looking forward to the Wiltshire game, it will be a great way to end 2013. We are going into it off a very exciting win against Paris and we’ve all been working really hard as a team so I can’t wait to see that work paying off on track. This is the first time our two teams have met so it will be great to play against a new opponent, even if we do know one of them very well – the lovely Lethal Sizzle!”

Sizzle relocated earlier this year and joined Wiltshire after leaving CCR who seem equally as excited about the match up: “We’ve been really looking forward to travelling up to Birmingham to meet the CCR Slay Belles on track! WRD are a small but perfectly formed team with big goals for 2014, and whatever happens this weekend we’ll take a lot from this game – we can’t wait for that first whistle. On a personal note, I can’t wait to see my CCR chums again, it’s been too long!”