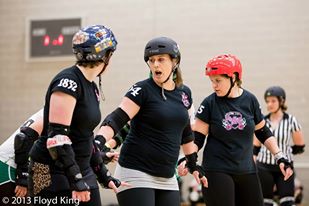 The New year may have only just started but CCR are well into their 2013/14 bouting season. Currently the Birmingham team are in the middle of playing 4 games in 4 weeks. This weekend, things continue to gather momentum as CCR’s B-Team head into the sprawling fields of Herefordshire to play, you guessed it, Hereford Roller girls.

At the beginning of the season the B-Team were joined by a new coach in the shape of the very talented and enthusiastic Illbilly (Crash Test Brummies, Team England). Working closely with veteran coach Barry Fight, his aim is to make the B-Team into a lean, mean skating machine. He reflects on his time so far

“CCR B team the Slay Belles work so hard and are a lovely bunch of people! I’m really proud of how they adapt to new elements of the game play and have really helped create their own game. We have a lot of exciting games planned this season, with more in the pipeline but we always treat every game with the same mindset, focused and determined… and to have a lovely time. ”

CCR’s B Team have played well recently notching up wins against Paris B and Wiltshire Roller Derby. Could Hereford be another win? Illbilly considers the opponents

“Hereford are a tough opponent and include some very experienced skaters and we expect them to have been planning to upset our walls. But time will tell…”

Hereford are a strong team and won’t want to make it easy. The team will, no doubt, be wanting to put a win under the belts after narrowly missing out against Nottingham Rollergirls. The Herefordshire team have been pulling out all the stops, working diligently. As Hereford skater R2-Dee2 explains:

“We’ve been training hard, not only in preparation for this bout, but for The Heartlands Tournament too, which we begin in February.”

Officially the two teams have never met before, however, there is history between the players with founder of the Hereford team being a very familiar face. R2-Dee2 considers the connection CCR shares with Hereford. 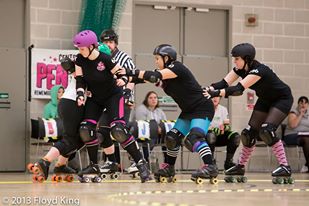 “We’re really excited to welcome the Slay Belles to Hereford on Sunday. We played our first ever closed bout against CCR, and our head coach, EveL Hart skated with CCR before leaving to set up HRG.”

Friendships aside, both teams are ready and raring to go, hoping to start 2014 how they mean to carry on. Can the Slay Belles continue their streak or will the Bullies stamp it out?

In the following weeks the B-team play Wiltshire away, and there will be an Intra league game: Bad Apples vs Queens of Steel. Come along!