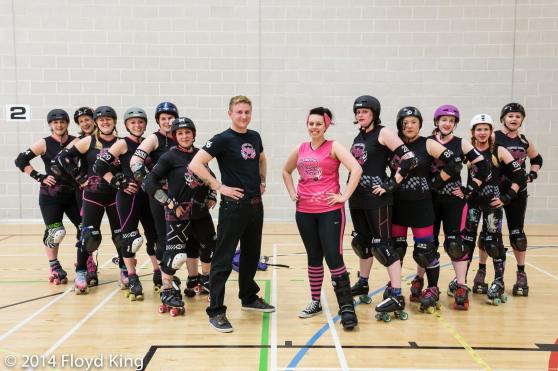 Central City’s B team are currently on a triple win streak – with a set of confident defeats over the MRD furies (244-72), Hot Wheels (203-105) and Evolution (265-123) roller derby teams. The B team have been going from strength to strength and are keen to prove themselves once again.

Captain of the B team, D’Elusive Del had this to say on their upcoming bout “… really looking forward to this game, I’ve never played Birmingham Blitz Dames before so it’s a long overdue match for me. The girls have been working really well together and gelling as a team, with our hard hitting blockers and our nippy jammers this will be a good game.”

So far the Bomb Squad has had a great season, with four wins already this year, most recently against Milton Keynes Roller Derby (193-125) and an absolute brute of a score difference, when they played Severn Roller Torrent B (317-30).

The two derby leagues of Birmingham both have a strong season behind them already and both are enjoying a hard earned winning streak. The teams have not met in their current incarnations, and are sure to want to prove themselves. Which will be successful in the battle to be Birmingham’s number one? You’re gonna have to come on Saturday to find out. See ya’ there bab!