Last but no means least here to stake their claim on the relic we welcome our sisters from the Emerald Isle, Dublin Roller Derby into the competition!

Dublin Roller Derby have grown in size and strength over the last few years seeing their A, B and C teams perform strongly both at home and abroad. This season has seen Dublin’s B team racking up some serious international experience with games against Barcelona Roller derby,  Rock City Rollers (Eindhoven), Rollergirls of the Apocalypse (Germany) and Roller Derby Caen, Roller Derby Rennes (France) and also a match up against Paris planned in the not too distant future! *Phew* 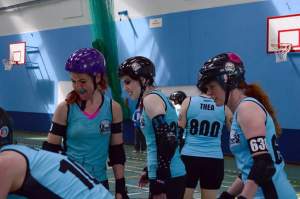 So what makes the ladies in blue tick? We posted some questions to Crash Test Crummy to find out…

Tell us about your team:

DRD B has been working hard and as a relatively newly formed team at the beginning of the year, has made huge progression throughout the season and we are really looking forward to showcasing what we have to offer in this tournament.

On game day you will usually find me…

On the jammer line usually. Or having the craic with my team on the bench. Game days are the best!

“Talent being equal, players with a positive, optimistic attitude will outperform those with a negative, pessimistic one.”

And it’s gotta be…. ducks fly together!

Who are you looking forward to matching up against today?

Seriously, every single team. But if I absolutely had to pick one then I guess it would be Rainy City as we played them last year but I didn’t make it to the game on time and was unable to play. It’s the only game I have not played since I joined the team so I guess this is my way of making up for that. Also it looked like a great game!

If you could have any celebrity/fictional character on your team, who would it be and why?

I think it would have to be Jeff Goldblum as we have a stretch named after him and also how awesome would that be! I can hear him trying to make sense of the madness of derby already!

What’s next for you?

Right now as a team we are focused on our remaining games for the season. We play Paris Roller Girls on the 17th of October which promises to be an exciting game, we have played them twice before and each won a game so this will be a very competitive one indeed. After that is the tournament full of fantastic teams to be played and then finally we  play Zurich Roller Girls in December.