My Roller Derby World Cup journey begins appropriately enough at the time of the last World Cup, in December 2014. I remember being with two other skaters, streaming the action from Dallas and learning as much as we could from what we saw. We were each relatively new to the sport. I’d begun learning to skate a few months earlier with my hometown league Roller Derby Leicester, and was at the stage where I was brave enough to begin attempting transitions (a 180 degree turn), but was well short of the ability or finesse to pull one off. I’d seen our A team skaters performing transitions and felt I would die happy if I ever managed to perform one successfully.

Amongst the three of us watching, myself and Wiggles were eligible for Scotland and Lisa for South Africa. We joked about one day skating for our nations at the World Cup, and I for one had absolutely zero expectation that it would ever happen for me.

Fast forward 18 months and not only had I achieved my life goal of performing a transition but I’d now spent the best part of a year jamming for RDL. Our league had also received a message from Team Scotland asking if we had any eligible skaters interested in the upcoming tryouts for the World Cup training squad. I’d never skated at a level higher than British Champs Tier 3, in which we were now most of our way through what proved to be a winless campaign. But, I was progressing as a skater, and fancied seeing if I could turn the likelihood of skating at a World Cup into something more than just a joke.

I made the journey to Glasgow with fellow RDL skater CanTankerous with no idea what to expect. Knowing the standard would be unlike anything I’d faced before allowed me every reason to just throw myself at the opportunity, and by the time an afternoon of skills, drills and a scrim had finished I felt like I’d smashed it! A fortnight later I was doing my evening shop at Morrisons (rock ‘n’ roll!) when the long awaited email from Team Scotland came through on my phone saying I’d made it into the 30-strong training squad. Had I been at home when I received this news I would’ve celebrated with greater exuberance, but with vegetable section etiquette to observe a gallant fist pump had to suffice.

Monthly training sessions in Grangemouth, the Road to TBC tournament in Cardiff and an away fixture against Belgium swiftly followed. With each exposure to international level derby I felt I was returning to Leicester a whole new skater. A squad selection game in February 2017 would then be our last chance to prove ourselves worthy of one of the 20 spaces in the final World Cup squad. This game wasn’t my best but it turned out I’d done enough to make the final 20. This time I was at work when the good news came through, leading to a muted celebration with colleagues in our corner of the office.

Team Scotland was one of the first nations to announce its final squad, doing so almost a whole year before the World Cup itself. While there are potential downsides to this approach, I’m glad we opted for it. Straight away our training sessions gained a new intensity. Now they were being held fortnightly, and freed from uncertainty over our places in the squad we were each able to concentrate solely on preparing as a team for the tournament itself.

With each Scotland training session my appetite for playing at a higher level was growing. RDL were now back in a winning groove and by summer 2017 we’d won promotion from Tier 4, but the time had come for me to move on. The lure of Central City Rollergirls had become increasingly difficult to ignore ever since RDL’s captain Brooks had made the move across the Midlands the previous year, and now it was my turn. Brooks is and always will be my derby hero (I tell her this frequently enough that she must now be long since past the weirded out stage), and she had only the most positive things to say about the people, the setup and the standard of play at CCR. I’d heard the same from others too and once I’d experienced my first session here my decision to move was made.

I quickly felt at home with my new league, and with the increased exposure to such a high level of derby, my game inevitably gained new dimensions. My fellow CCR jammers are a dream to learn from and try new skills out with, and our blockers make walls that leave us constantly needing to rethink ways of getting through. It’s now been over 6 months since I joined, and the contribution this time with CCR has made to my own World Cup preparations has been invaluable. 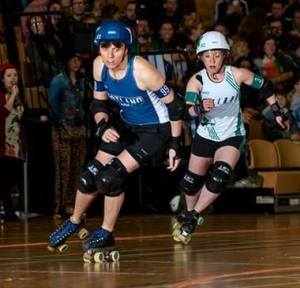 At this point I also need to name-check Moji AKA Super Eagle AKA Mother Knows Best for getting me down to the gym on those early mornings when I’d seriously prefer not to. Moji gave me a lift to my very first newbie session with RDL and is now with CCR too. She’s been there to see me develop from the flailer I was at the time of the last World Cup (a flailer retrospectively described as ‘dangerous but not in a good way’ and ‘sh*t’), into a skater now competing at this World Cup. Also, just because she’s currently holding a knife to my throat oughtn’t taint the fact that she is without question the woman behind my success.

For the largest chunk of my life, playing at a World Cup in any sport was something I’d never imagined minutely possible. Family, friends (especially Hateh and Skiddo) and my awesome partner have all played their part in this journey, and it’s been the greatest part of my life skating alongside and arsing about with everyone at Roller Derby Leicester, Central City Rollergirls and Team Scotland. It may have blocked out my weekends for the past 18 months and depreciated my car’s value by 15,000 miles, but the journey to this week’s World Cup in Manchester has been so much more than worth it. I’ll be incredibly proud to take to the track to represent Scotland, and equally proud of the rest of the CCR contingent who are representing our league as skaters, coaches, officials, announcers and volunteers. Let’s make this World Cup the best yet!

CCR sends our love and support to all those playing and working the Roller Derby World Cup! Big High Fives go straight to our members representing!