Wow, this Summer has gone by fast; one minute we’re cancelling games due to the snow, next we’re getting our factor 50 on as we go up and down the M6 and now, well, it’s almost ‘PSL time’ (that’s pumpkin spice latte). Let’s reflect on the last few months here at CCR towers, in the words of the illustrious Verry Cherry #69. 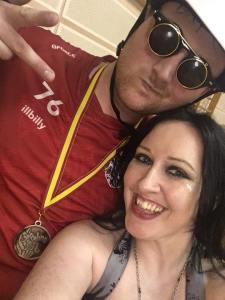 “After a stellar start with international trips playing in France and Germany, it was time to focus on more ‘local’ games (and by local we mean 4 hours up the motorway – we know this means nothing to you Stateside but in the UK, this is far). Our first game was in Newcastle to play a team who are almost level with Arrg in terms of the amount of times we’ve met – the lovely, Newcastle Canny Belters!

Our Head Coach, Illbilly, was back fresh from playing at the Men’s World Cup (with a silver medal to boot) and it was time to put the months of training into practice and focus on this season’s goals. We wanted to continue building on our strengths, and continue to play challenging teams. The game was hard fought, Newcastle are built of strong stuff! They are tough and focussed, but CCR pulled off a win, with a 72 point differential. High fives all round!

I’m going to jump about the time line here like the dude from Quantum Leap, bear with me! #warning #whattimelines #disruptingthespacetimecontinuum #1955?

Next in the pipeline, we had 2 sanctioned games, with two teams we have never played – Steel City from Pittsburgh and Lille from well, Lille.

First up, was Steel City in May as the expo game in Euro Clash (hello Newcastle, again). After watching Tiger Bay and Blitz Dames grabbing weighty wins from them we went into the game feeling determined, like we had a job to do – and do a job we did! CCR worked hard (I can say this with pride as I was LUM for the day) playing smart, steady defence, patient offence and quick-witted jamming! At the final whistle, we were able to obtain a 245 points differential, giving us a win to take way in our pink and black bag!

Back on home turf, in our one and only home game this entire season, we hosted a double header with our A Team vs Lille and our B team vs Hallam Hellcats. I wasn’t at this game as I love Guns and Roses more than CCR so went to Download Festival, cue me (a few ciders down) sitting in a tent with Rollin’ Rat screaming at the CCR Forum waiting for updates while trying to explain the rules of roller derby and the WFTDA ranking system to our fellow campers.

First up, was the A Team game vs Lille. Although we had never met Lille before we knew there were a strong team not to be underestimated. It was a close game as both teams played strong and strategic. After 60 minutes, and after a few more Dark Fruits for me, CCR had claimed the win with a 24 point difference. 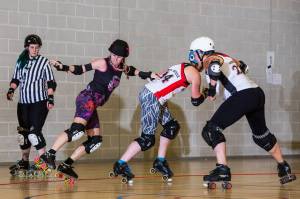 Next came the B Team game. We had recently welcomed new skaters into our B Team roster including Mim the Merciless, Honour Rampage, Rita Skate Worth, Darcey Daydream and Violet Disregard. The new look B Team took on hard hitting Hallam and came out victorious with a 56 point differential. More cider followed.

After a whirlwind couple months, we were excited to move up the WFTDA rankings. We had worked hard, travelled for many hours, played some challenging games, this was exciting. In the early hours of July 12th, with our WFTDA rankings at #57, we were invited to play at the WFTDA Continental Cup hosted by our “this town is big enough for both of us” neighbours Birmingham Blitz Dames. We accepted. There is no more glamorous place than Telford. We can’t bloody wait!

Other Photos from Verry Cherry Productions