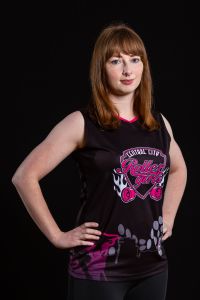 I joined CCR in June 2018. I transferred because I wanted the opportunity to develop my skills and be pushed to become a better skater.

I don’t think I have a specific favourite derby memory on track, its all the bits that go alongside it: the weird games that you make up to pass the time on road trips, stops at a variety of services, brunches, after parties, home game atmosphere…

3) Which position do you play?

Forever a brace. Also pivot on occasion for the B team.

The people that taught me to skate – that taught me how to crossover, transition, plow stop – all the stuff that seems super scary when you are learning – for the patience they put into explaining the basics

I think I have had the same two goals for the entire time I have played: plough harder; communicate more. But now also, become a full A team member.

I mean it would probably be the time that me and my jammer wiped each other out as I was going to the box and they were leaving at a champs game. Mainly because it really hurt.