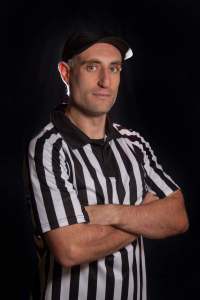 First went to Roller Derby in 2010 to see Dolly Rockits vs Newcastle, joined as an official April the following year. My move to CCR was gradual as I changed jobs and moved house a number of times but became A THING around April 2015.

So many! Derby has taken me all over the world often to places I wouldn’t normally have seen. Travelling to Miami with CCR in 2016 was a step up from the usual council sports hall in Merthyr. Working as a volunteer track crew at the Womens World Cup in Manchester was pretty special. The atmosphere at that event was incredible and something that might not ever happen again in the same way. I got to be right by the USA team bench for the climax of the final. But mostly the after parties, nothing will ever quite top the first two Louisey Rider Cup parties for glitter.

JJ King Typical , Ratty and Ed at CCR for really helping me kick on and making CCR a welcoming place, and Them Killjoy for just being. 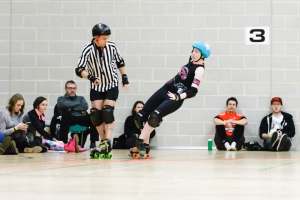 This years big goal was to get to officiate at the WFTDA European Continetal Cup in Helsinki which I’m about to achieve at the time of writing this. Doubly awesome as CCR’s travel team is skating there and the league is bringing a huge travelling support. Mostly for me the goal will always be to be part of the roller derby community and to be having fun. And maybe to go one better than the ref who bought an inflatable penguin in to an official review at last years ECC. 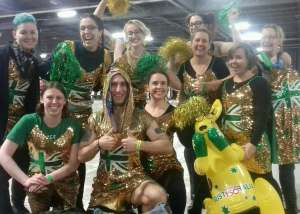 Embarrassing moment It’s a long list. Lots falling over whilst standing still (snipers). Probably my new plates literally falling apart during the MRDA Championships Final in 2017 causing the game to be stopped whilst people frantically ran round trying to find metric tools to put me back together. Definitely not the video filmed by Holly in Bears hotel room after the England vs France games which definitely does not exist and definitely did not happen.